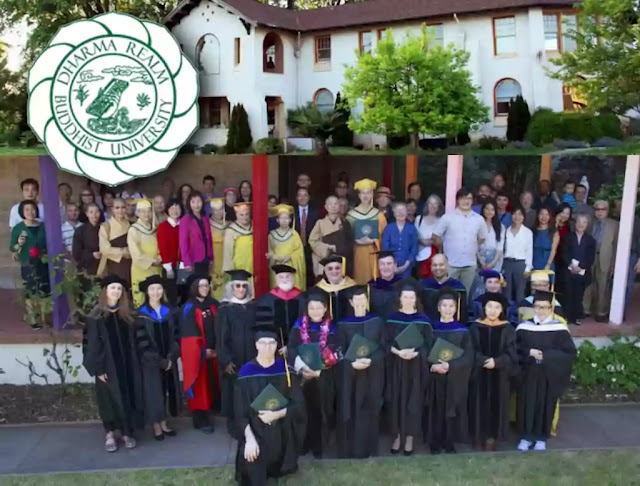 Dharma Realm Buddhist University in United State is registered by the California government. It offers bachelor’s and master’s programs in Buddhist research and practice, Buddhist scripture translation and language studies, Buddhist education, Chinese language studies, and confer degrees. Both monks and laypeople are welcome to apply for admission, and those with insufficient financial ability can also apply for scholarships.

After every evening class, the class of listening to the scriptures and teaching the Dharma is a class jointly participated by the four disciples of the Holy City of Ten Thousand Buddhas. First, listen to the Mahayana Buddhist classics explained in both Chinese and English for an hour, such as the Huayan Sutra, the Lotus Sutra, and the Shurangama Sutra. For another half an hour, different people take turns to come to the stage every day to practice teaching the Fa, which is also conducted in both Chinese and English. Those who are bilingual must translate by themselves, otherwise, they will have to hire someone to translate for them. On the one hand, it cultivates the skills of teaching the Dharma. On the other hand, everyone can share with the public and accept corrections if they have any thoughts and feelings on the way of listening to the Dharma and practicing.

Dharma Realm Buddhist University United States also holds exchange activities with other universities in California. The University of Hamburg, located in the northernmost part of California, has dozens of students coming to Dharma Realm Buddhist University in the Holy City of Ten Thousand Buddhas every year for spring and autumn classes. Let go of the hustle and bustle, let go of the defilements, and exchange thoughts and hearts in the course. Students from Berkeley University, San Francisco State University, and other schools who are interested in Buddhism will also come to the Holy City of Ten Thousand Buddhas from time to time to participate in seminars at the University of Dharma to explore the truth of life in the universe, and to learn vegetarian food, meditation, and Taijiquan. Body and mind are refreshed.

Dharma Realm Buddhist University takes Dhamma as the main course content of its teaching. Teachers and students all take this as the goal of studying hard and studying together to achieve the ultimate wisdom and compassion. In such an environment, rigorous self-discipline life has become the norm in everyone’s life. Students, teachers, monks, laypeople, men, women, and children are all treated equally, regardless of class, regardless of you or me, and respect for individuals and various cultural traditions. Customs, backgrounds. In addition, there are students, teachers, textbooks, classrooms, etc. The characteristics of the true connotation of Dharma Realm Buddhist University are that the Dharma Realm is the body and the Dharma is used. Everything is a classroom, and there are no textbooks. , All people, things, and things are all objects of study, and always give yourself a good opportunity to cultivate merit, improve the law, and continue wisdom and life.

The Dharma Realm Buddhist University Library is the largest library in Mandixiano County. It is located in a red brick building with a Tudor (16th century British Dynasty) style building. It is located in the center of the Holy City and is open to students, faculty, and staff on weekdays. , and used by residents of the Holy City of Ten Thousand Buddhas. In addition to the general Chinese and English books, the most important feature of the collection is that it has a wealth of Chinese and English Buddhist scriptures and Buddhist works and language textbooks, audiotapes, and texts from various countries. Periodicals are also mainly Buddhist and Buddhist publications. There is a rich collection of books on Chinese Buddhism, including commentaries on various orthodox Buddhist scriptures, as well as Buddhist scriptures translated from Chinese into many languages. The museum also houses micro-scroll videos of Tibetan Buddhist materials.